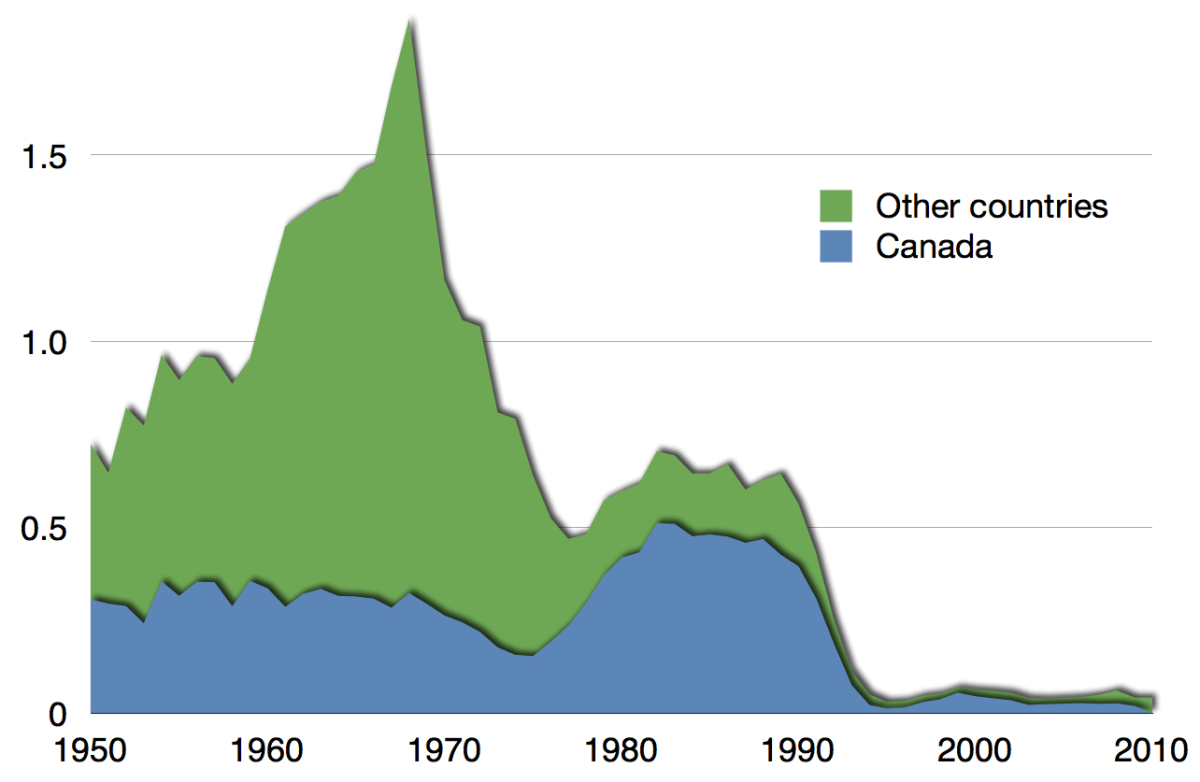 For over 500 years, fishermen from Canada, but also from Europe (Spain, Portugal, France, Germany) had been fishing the abundant banks of North Atlantic cod around Newfoundland in Canada. Pierre Loti, in his novel “an Iceland fisherman” published in 1886, describes the “myriads upon myriads of fish, all alike, gliding slowly in the same direction”, which could be seen immediately below the surface of the sea, “plainly distinguished through the transparency”, and illustrates the fantastic plenty of these cod banks, where fishermen just needed to drop their lines, see the cod biting the hooks, haul the lines, take the cod off the hooks, and throw the lines over and over again. A fisherman’s dream, explaining why boats travelled from Europe, thousands of kilometres across the Ocean, to participate in this bounty.

However, these fisheries were brutally closed in 1992, following a complete collapse of the number of fishes – and have not recovered since, making it the most important industrial closure in Canadian history, with 35,000 jobs lost overnight. I find the history of this collapse an interesting metaphor of the flaws of our over-confident, technology-driven societies.

What happened? Traditionally, fishermen used lines to selectively catch cod only, near the surface, and depended upon luck to find the fish banks. Starting in the 1950s, new technologies were introduced: trawlers captured all kinds of fishes in addition to cod (including the commercially worthless capelin), at greater depths, using sonar to locate the fish banks. As a result, the quantities of cod being fished initially exploded, from 500,000 tonnes yearly in the 1950s to 1.8 million tonnes in 1968. Additionally, the individual size of the cods being captured rose, so that the economic yield improved even further. Technology seemed to have triumphed, economic growth brought prosperity, in an endless upward curve.

A first warning happened in 1968, when the quantities being fished experienced a first partial collapse, from 1.8 million tonnes captured yearly to 1 million and then further to 500,000 tonnes in the mid-1970s. The Canadian government reacted by setting up an Exclusive Economic Zone of 200 nautical miles around its coasts in 1976, and forbade any foreign fishing boat from operating in this Zone. This had an immediate effect of reducing fish capture, because the number of fishing boats temporarily declined. This resulted in a partial recovery of the fish stocks. Under the intense political pressure of local economic and social interests, and despite increasingly alarmist warnings by scientists, the Canadian government did not impose stringent enough fishing quotas to prevent Canadian fisheries from increasing their capacity, so that the captures of cod increased again over the 1980s, until the final collapse of 1992.

The fundamental reason of this collapse are that deep-sea fishing using trawlers captured two ecologically important categories of fishes:

This was overfishing, because it depleted the food upon which cods depended for their survival, and because it destroyed the basis of the population replacement of cods. But this did not appear in statistics, bearing on economically valuable fish only, so that capelin was not accounted for. In addition, these large, old adult cods captured from deep sea increased the mass of captured cod in the short term. They made believe that the deep sea accessed by new technology contained a wealth of unexploited resources just waiting to be harvested – a fatal illusion.

I consider this sad sequence of events as a good metaphor of our contemporary societies:

My competences are originally those of an engineer – but I have been making incursions, for quite some time now, into several other fields, such as economics, politics, psychology, social sciences and history. View all posts by Sergio Arbarviro